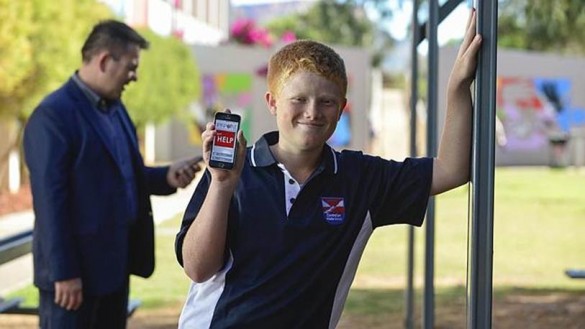 In a town like Alice Springs, GPS outclasses truants

AN Alice Springs school is one of the first in the country to track ­students using GPS technology to improve school attendance rates.
The tracking devices are also being used to help case-managed Aboriginal families locate their children to avoid losing welfare payments if their children skip class.
Centralian Middle School has about 60 families signed up to the new program, which links students’ phones with electronic class ­attendance roles.
If a child fails to attend class, parents automatically receive a text message notifying them of the absence, along with a link to the GPS location of their child.
The technology builds on an existing notification program called “messageyou” that is used in about 1100 schools across the country to alert parents if their child is absent.
The new program uses GPS, WiFi and mobile phone tower triangulation to accurately locate the student.
Centralian Middle School principal Andrew Leslie said the technology had helped to address the problem of truancy at the school, which has a high indigenous population.
The technology also can be used by students to notify parents of their location in the event of an emergency.
“I think it is wonderful technology,” Mr Leslie said.

He said the school had offered the mobile phone application to parents involved in the federal government’s School Enrolment and Attendance Measure to prevent them losing welfare payments for non-attendance.

SEAM is targeted at children in remote Aboriginal communities in the Northern Territory with attendance levels below 80 per cent.
“Parents can no longer say they can’t be expected to comply because they don’t know where their child is,” Mr Leslie said.
The number of families being reported for non-attendance at Centralian has fallen from 60 children a week to just five since the technology was first implemented a year ago.
Mr Leslie said overall attendance rate at the middle school had improved from 68 per cent to about 90 per cent.
Mark Fortunatow, chief executive of Adelaide-based company MGM Wireless, which developed the program, said the take-up rate for the Pinpoint application was growing at about 10 per cent a week since it was first launched in February, with about 250 schools now participating in the program.

“The rate of growth has been amazing,” he said. “It is effective to improve student safety and attendance, parents love it, schools are coming on board, and kids don’t seem to care.”
The program is free for schools and parents, but the company is working on a further-enhanced version for release later this year that will have a micro-­payment attached.
Centralian parent Kylie Anderson, whose 14-year-old son Reece has the technology on his smartphone, said her son “wouldn’t dare” skip class.
“It gives you peace of mind,” she said.

“And it is a good idea if they do decide to go off with their mates.”